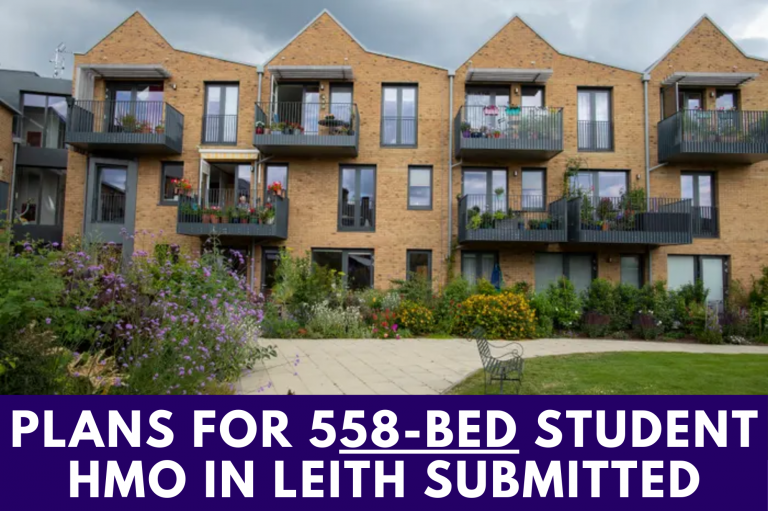 Radical plans to change the face of a former scrap yard have officially been revealed after a planning application was submitted by developers.

Developers are planning to build a mixed-use student HMO (house of multiple occupancy) which could place up to 558 students during term time if Edinburgh City Council grant planning permission.

Alongside the 66 HMO compliant flats, the plans include 18 affordable homes and two 2-bedroom warden flats.

Also alongside the student accommodation block, there will be four shop unites and a public cafe with a ‘digital co-working space’.

HMO Property amenity standards, are the number and type of amenities that must be provided in all Houses of Multiple Occupation in accordance with the size and type of HMO property… read more

The plans will transform the former Dalton’s Scrapyard on Constitution Street and the former Edinburgh and Leith Gasworks site on Baltic Stree.

The proposals also replace previous plans for the site after the scrapyard site was purchased last year by the developers.

In the Design and Access Statement for the plans, the developers describe the planned accommodation as having flats housing between 4 and 11 students, with no ‘studio’, or contained one-bed apartments, in the development.

Talking about the ‘digital co-working space’, the developers state it will: “provide high speed data and other business services, such as printing and copying.”

They add: “The facility is intended both for study and for start-up businesses.

“The intention is to provide a place which acts as an interface between the student residents and the wider public.”

Previous Post: HMOs are Growing in Popularity Among Investors ⏫